I love using my birthday as an excuse to spend an inordinate amount of time making some kind of fancy/crazy/funny/delicious cake to share with my friends and family. I don’t do it every year because of how elaborately involved a process it always becomes, but the years when I’m able to I have so much fun!

I decided to throw myself a birthday party this year. I haven’t had one for a few years, and after renovating my apartment last year I never had a house re-warming party, so this introvert was long overdue to have some friends over for a celebration. The only problem was that I couldn’t figure out what kind of cake to make!

It would need to represent something relevant in my life or be personally significant in some way; that’s what makes the process fun for me. Like in 1998 when i made my 16th birthday cake with a silly fashion illustration of myself as a cartoon wearing an outfit I’d designed (but hadn’t yet made) out of fabric that I had just bought on my very first trip to New York with my home-ec sewing class that month… 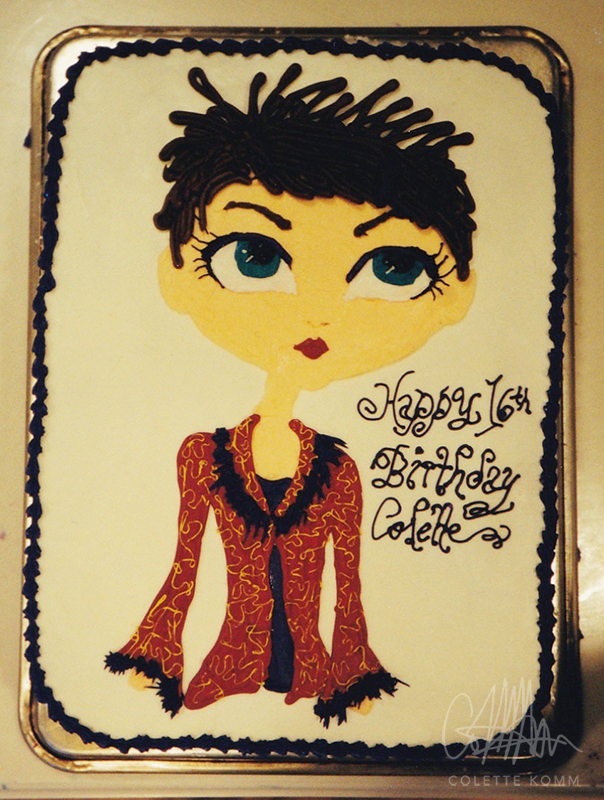 Or in 2005, when I was obsessed with Napoleon Dynamite and made a Pile of Giant Tater-Tots cake (I baked yellow cake in tomato paste cans, covered them in yellow icing and tossed them in toasted coconut with yellow food dye) and wrote “Happy friggin’ birthday!” in icing “ketchup”… 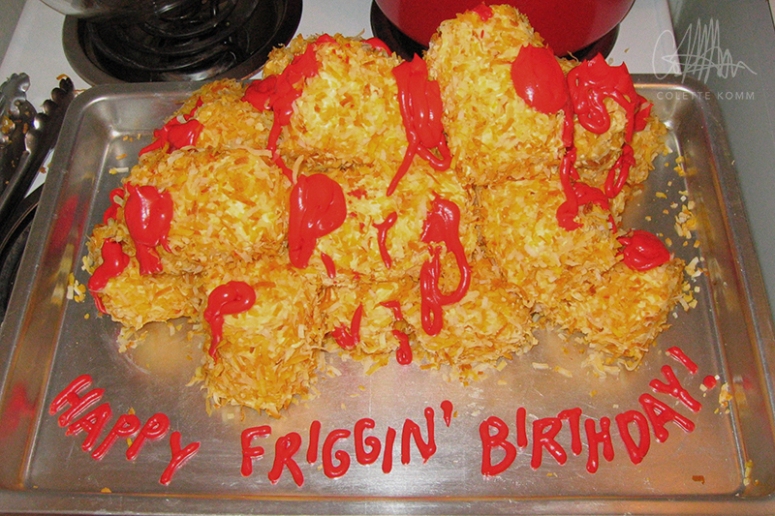 I wanted this year’s cake to say something about me in the few years since I last made myself a birthday cake. The obvious idea was to do a renovation themed cake but my renovation involved a lot of sleek, high-gloss white cabinets, and a sleek, glossy white cake would be boring, and not enough of a creative challenge. 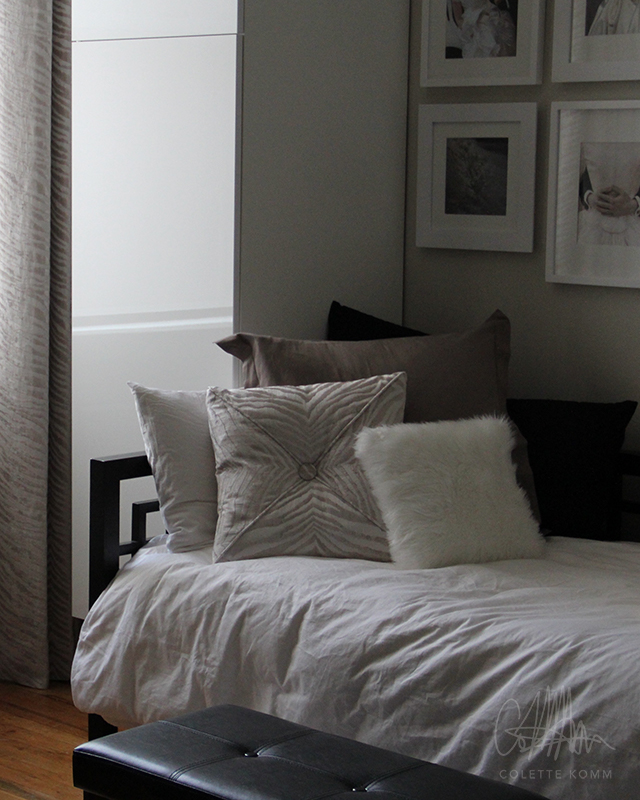 So I thought about making a cake version of Space Girl’s Jetpack (part of the Halloween costume I made for myself last year), but I couldn’t accurately recreate it without it being incredibly unappetizing, what with ALL THE GLITTER! 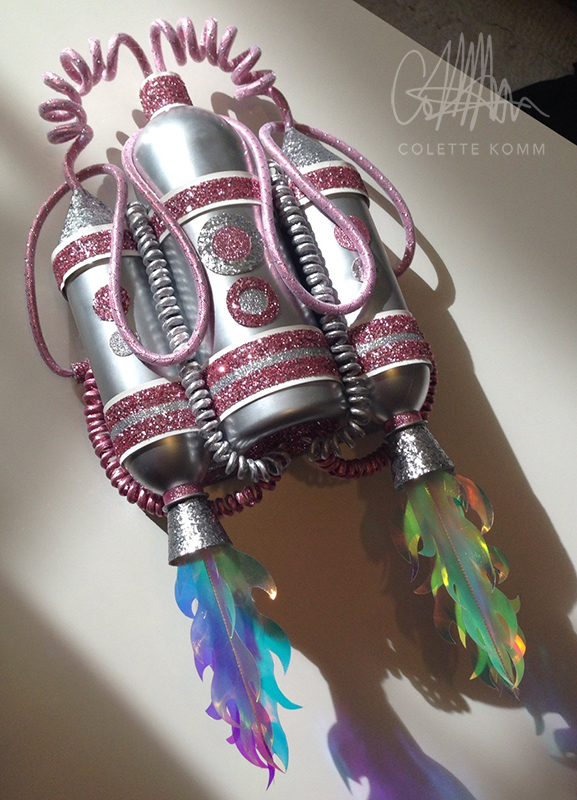 I was at a loss. My last idea was that I could make a baby animal cake, inspired by the drawings and paintings of baby safari animals I’ve made over the last few years for my now two-year-old nephew’s bedroom, but I wanted to do something a little more adult to go with my newly “grown-up” apartment! 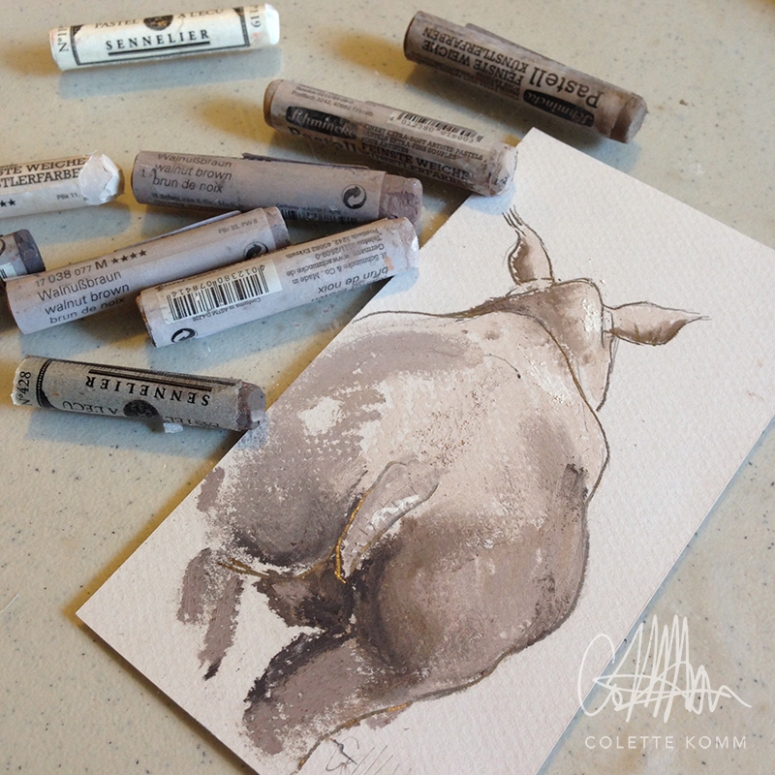 A week before the party—after a fruitless brainstorming phone call with my out-of-state best friend— I went to bed, catastrophizing that I would have to cancel my birthday party on account of not being able to come up with a suitable birthday cake idea. But around 1 A.M. the inspiration hit, and I was wired until 4 A.M., mentally constructing the perfect birthday cake(s), amazed that the combination of frustration and sleep deprivation had conspired in my favor. Not only did I suddenly have a solution, but it incorporated all of my possible ideas! 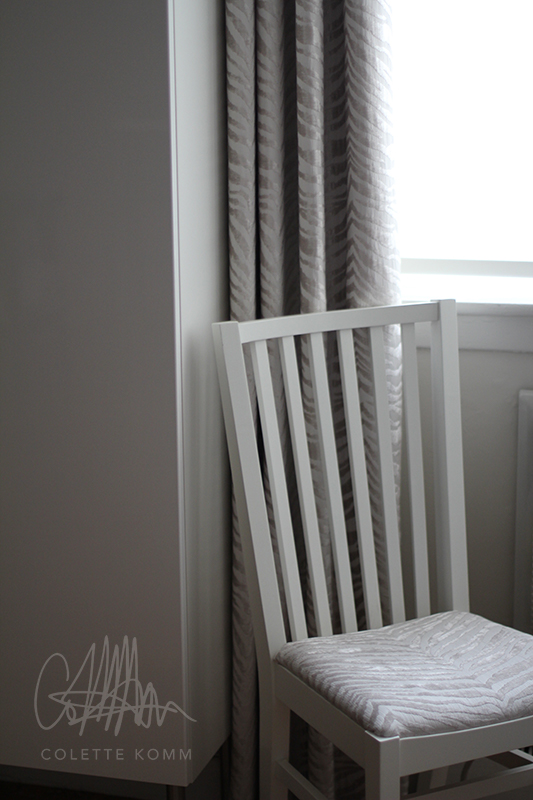 Instead of my white, glossy cabinets, the inspiration I took from my renovation was the beautiful tone-on-tone silvery/pinky/grey zebra striped fabric that I had made curtains, throw pillows, and re-upholstered my chairs and bar stools with. 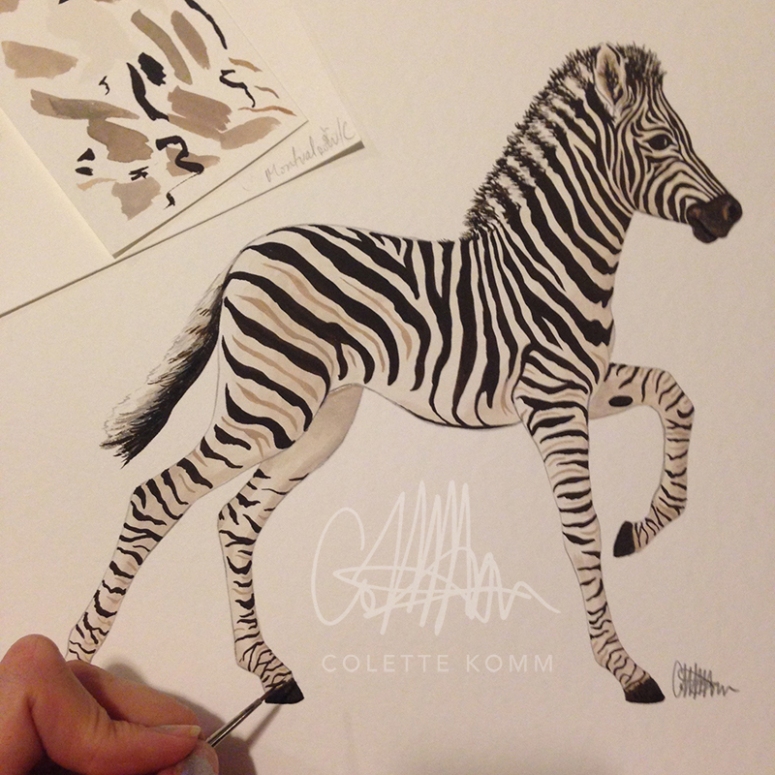 And the second zebra striped cake would be strawberries and cream, with the pink strawberry stripes hinting at the pink from my Space Girl costume. 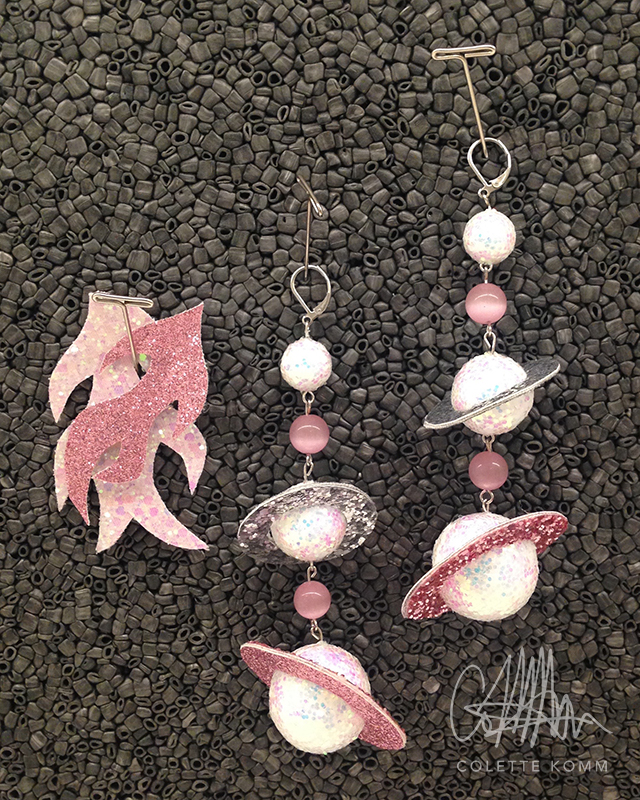 For weeks I’d had in mind two different back up desserts in the event that I never came up with a cake design. Serendipitously, those recipes were perfect for the technique I planned to use to articlulate the zebra stripes!

I had to alter the recipes quite a bit to get them to express my vision for the final cakes, but the original recipes I started with were both vintage Komm family favorites that I’ve long wanted to revise and turn into something new and luxurious. This added another layer of significance to my birthday cake project; with any of my creative projects, whether it’s someone’s wedding dress, a drawing, or a cake, having a meaningful back-story to the final creation makes it so worthwhile and immensely satisfying. Finding a connection to my inspiration is an inextricable component of my creative process; creativity can’t happen in a vacuum. 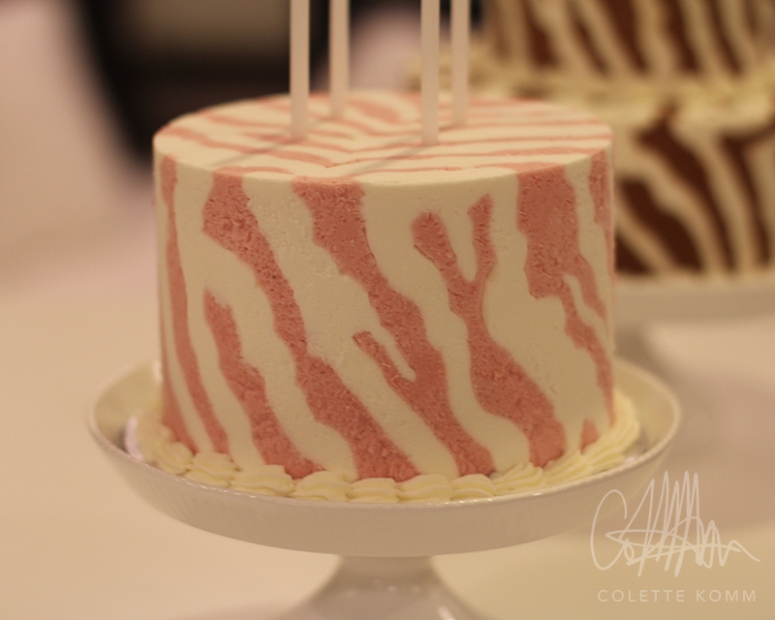 The frozen strawberries and cream cheese cake started with the recipe for what my family has always called “Favorite Dessert,” but a google search of the ingredients will tell you is actually called “frosty strawberry squares.” It’s a really fluffy frozen strawberry meringue with candied walnuts on the top and bottom. It’s delicious, but whenever I eat it I think how the best part is the candied nuts and there needs to be more of them. It’s also extremely airy—as in, not dense enough to turn into a “cake”—so I added a few ingredients, changed some of the ratios and made the strawberry meringue differently to turn it into a cheese cake while still keeping the distinct meringue-y taste of the original dessert. I added more flavor dimension by adding pecans to the walnuts, and—since it was a cheesecake—threw in a recipe of graham cracker crust to make the most delicious crumble that went between the strawberry and cream layers. OMG, it was soooooo good! 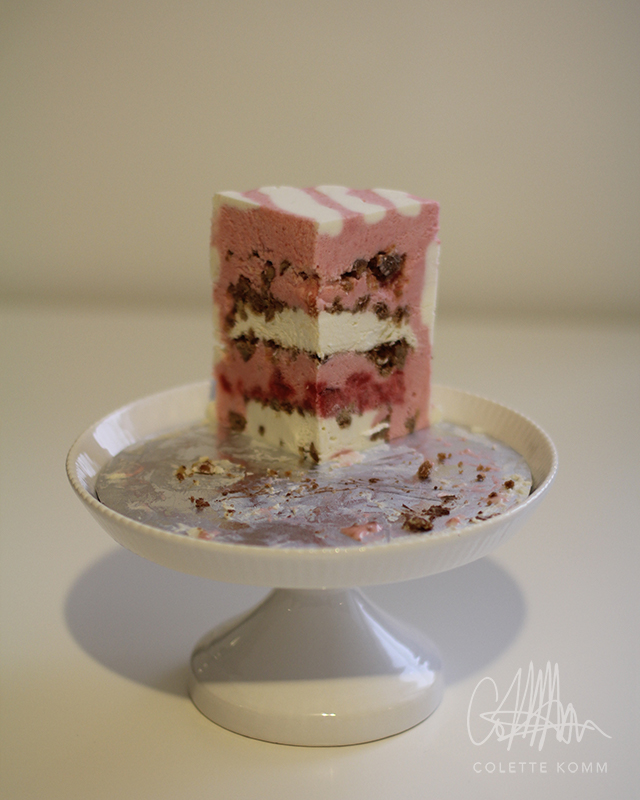 The chocolate zebra cake was a mousse cake. The recipe I started with is my own tweaked variation on “easy chocolate cream torte,” a recipe I found as a teenager and have made for all kinds of special occasions and birthdays. This time around I turned it into “complicated chocolate cream torte” (make that KOMM-plicated chocolate cream torte!). In its original form it’s alternate layers of chocolate mousse and giant chocolate cookies which soften between the mousse. This time I used more chocolate in the mousse to get darker zebra stripes, a firmer consistency, and deeper chocolate flavor to offset the vanilla cream, and I crumbled up the cookie part to layer in the cake the way I did with the nuts and graham cracker crumble on the strawberry cake. Unfortunately I never got a picture of the inside of it, so I guess I’ll just have to re-make it! 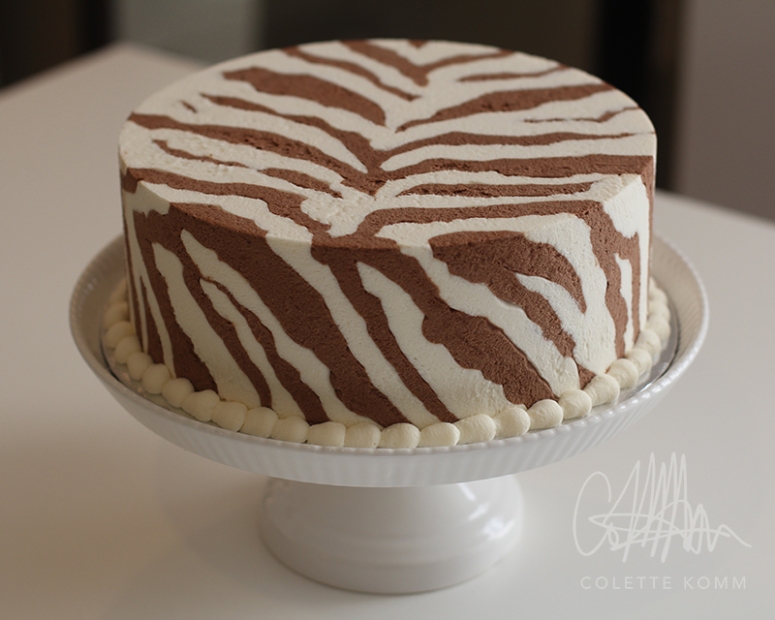 The white parts of each cake are variations on a recipe I developed in 2003 as a pie topping. It’s a whipped cream and cream cheese combination that pipes very nicely and tastes better than ice cream on a pumpkin pie! It complimented both the chocolate mousse and strawberry meringue perfectly. 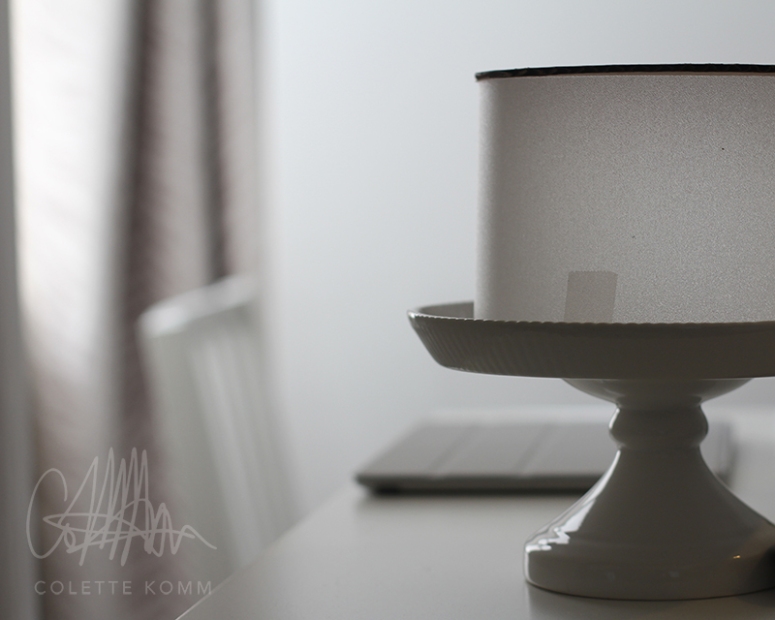 To actually make the cakes, first I had to decide how big to make them. I experimented with different sizes by cutting the plastic lining that I would pipe the mousse into and taping it into circles until I’d deterimined the sizes I wanted. Since the strawberry cake had to be frozen it could only be as big as I could fit in my freezer, but the chocolate mousse cake could be larger and multi-tiered since it only needed to be refrigerated. 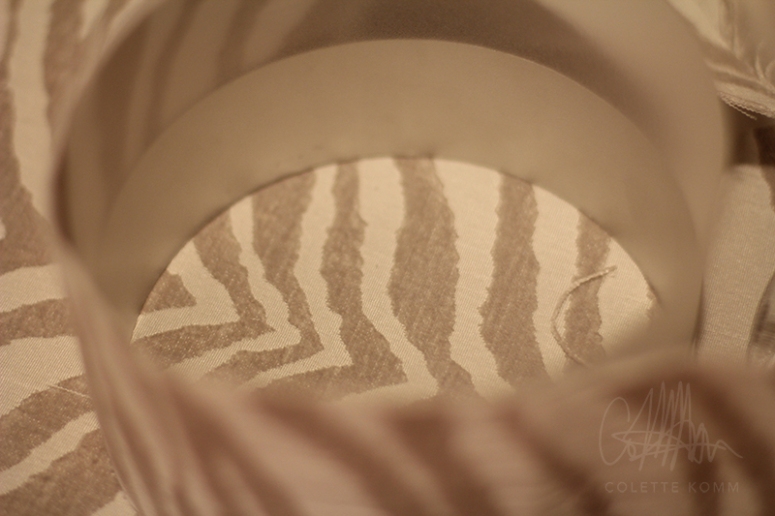 I fiddled around with the zebra fabric scraps to choose the direction I wanted the stripes to go on the cakes. 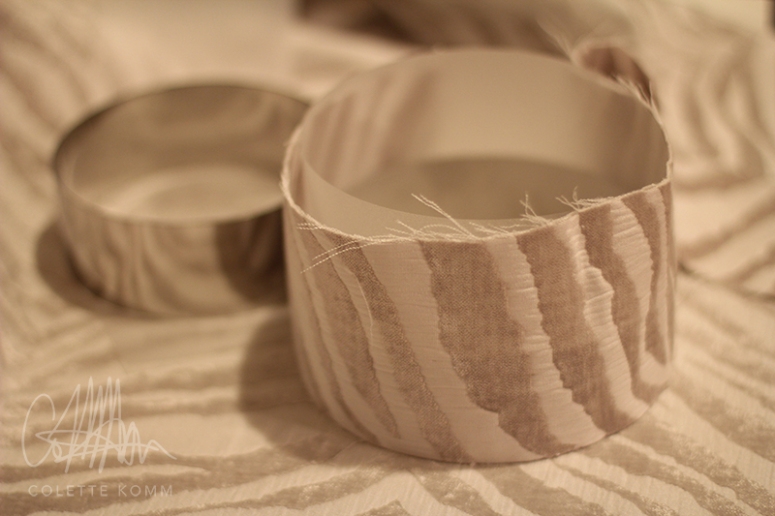 With the pastry rings lined with the plastic sheets I piped the zebra stripes from piping bags filled with the different fillings and didn’t finish until about 6 A.M. the day of the party. (I had to stay up all night to make the cakes so they had enough time to set up before being un-moulded.) 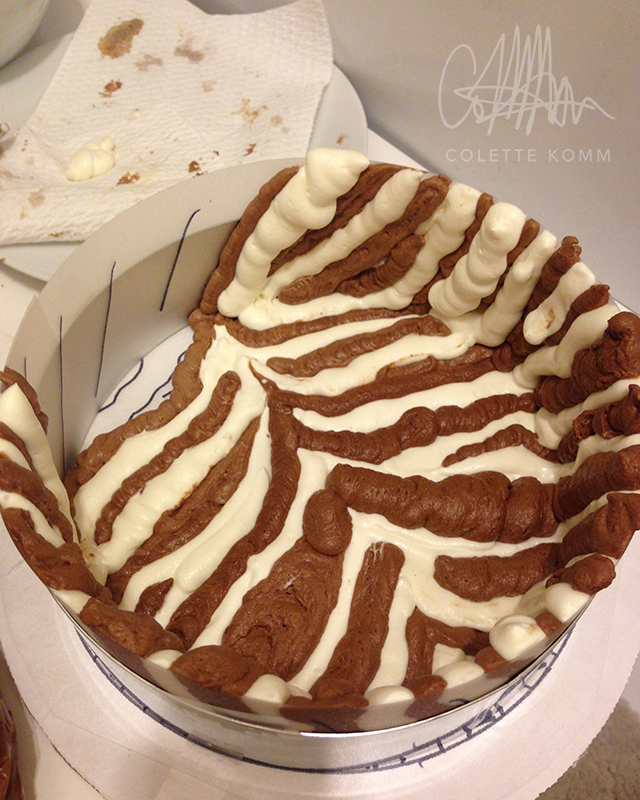 I can’t even tell you how immensly satisfying it was to turn over these cakes, remove the metal rings and peel off the plastic lining sheets to reveal perfect zebra stripes and crisp 90° edges! An OCD person’s ultimate fantasy, I tell you. 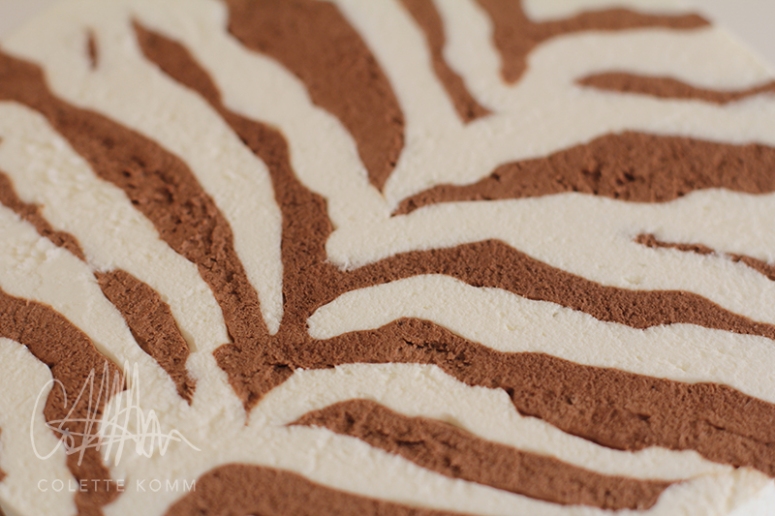 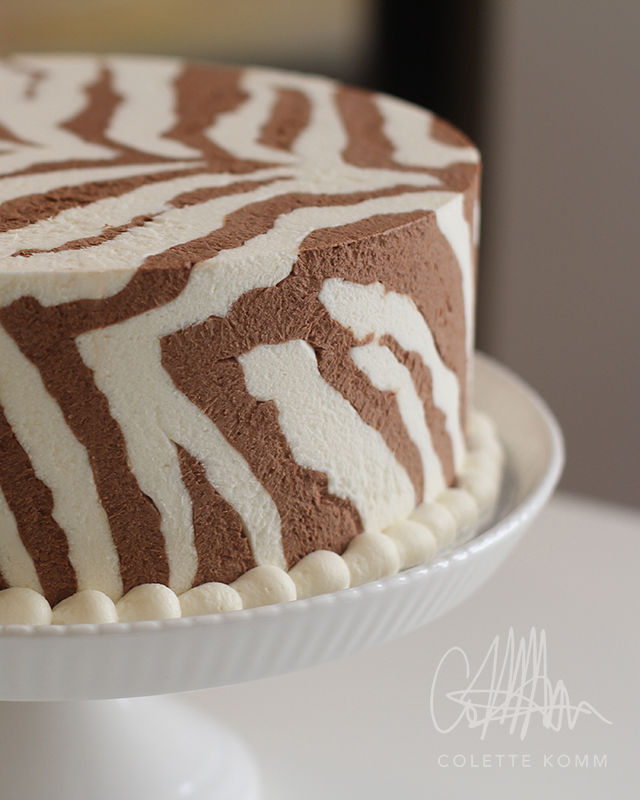 The cakes were a massive hit with my friends, and I was so pleased that my hair-brained middle-of-the-night idea worked out exactly how I envisioned it. My only regret is that I didn’t have enough time to write down the recipes and steps as I went along; but hey, having to make these again (for science!) would not be such a bad thing. These recipes definitely need to be documented and enjoyed again… and again! 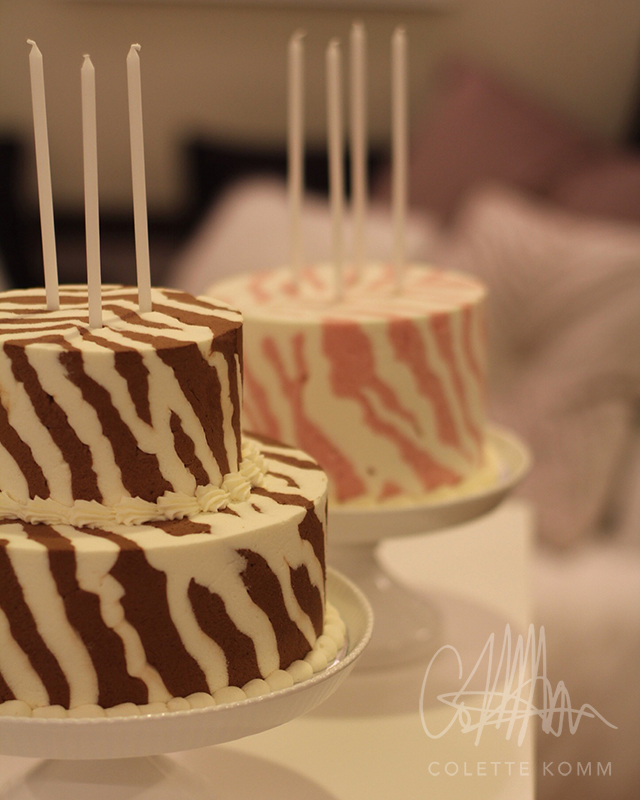 4 thoughts on “My 34th Birthday Cakes”